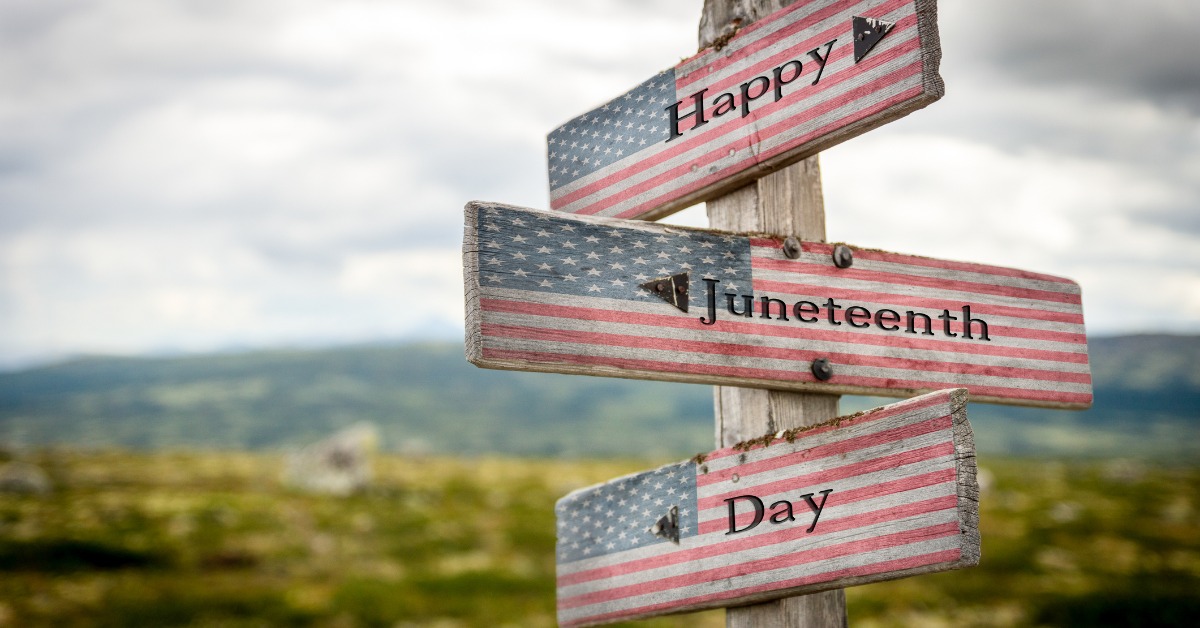 Juneteenth: Its Significance and How to Recognize the Holiday at Work

Juneteenth, celebrated each year on June 19, is a day to commemorate the end of slavery in the United States.

In 1863, President Abraham Lincoln signed the Emancipation Proclamation, which officially established that all enslaved people “shall be then, thenceforward, and forever free.” However, slavery continued in states under Confederate control that didn’t have a significant presence of Union troops, such as Texas. Many enslavers relocated to Texas due to the lack of enforcement, and the population of enslaved people there increased.

But on June 19, 1865, Union Army General Gordon Granger, along with 2,000 troops, traveled to Galveston, Texas, to announce that the Civil War had ended and, in turn, so had slavery. 250,000 enslaved people in Texas were suddenly free. Slavery was then officially abolished by the adoption of the 13th Amendment the following December.

Celebrations began the following year across the South, and soon, the recognition of Juneteenth spread throughout America and beyond. Today, Juneteenth is still a celebration of African American freedom, but it also serves as an important reminder of our country’s painful past. According to Juneteenth.com, Juneteenth “is a day, a week, and in some areas, a month marked with celebrations, guest speakers, picnics, and family gatherings. It is a time for reflection and rejoicing. It is a time for assessment, self-improvement, and for planning the future. Its growing popularity signifies a level of maturity and dignity in America long overdue. In cities across the country, people of all races, nationalities, and religions are joining hands to truthfully acknowledge a period in our history that shaped and continues to influence our society today.”

The meaning behind Juneteenth holds great significance for many people. And now, it is finally being recognized formally. In 2021, Juneteenth became a federally recognized holiday and will be an official Washington and Oregon state holiday starting this year. Seven other states consider Juneteenth an official state holiday, and most other states consider it a day of “recognition” or “observance.”

While private employers are not required to provide state or federally recognized holidays to their employees, many employers have signaled their commitment to diversity, equity, and inclusion (DEI) by adding Juneteenth to their holiday lineup. According to Hella Creative, a volunteer-based Juneteenth advocacy group, more than 700 large corporations observe Juneteenth, including Nike, Starbucks, Netflix, Target, Adobe, and Capital One. An Archbright poll conducted on mozzo in April showed that 48% of participating members plan to offer Juneteenth as a holiday, while 14% responded that they are considering offering it.

Steps to implement the Juneteenth holiday in your organization may include:

If your organization can’t add Juneteenth as an official company holiday, consider educating employees on its importance and celebrating it in other ways. Examples include organizing a potluck, inviting a guest speaker, or providing resources for employees to learn more about black history and how they can further their own DEI journey.

Lindsey Sosa joined Archbright in 2018 as an HR Consultant working with members on various HR assignments. In order to further pursue her passion for writing and HR compliance, Lindsey became Archbright's HR Content Manager in May 2021. In this role, she maintains the HR content in the Resource Library, writes blogs and articles, and stays up to date on constantly evolving HR regulations. Before joining Archbright, Lindsey worked as an HR professional across a variety of industries ranging from high tech to local government.